Britt G(erda) Hallqvist was born in Umeå, grew up in Visby, and was the daughter of Lecturer Johan Wilhelm Nyman and Dagny Henschen. She graduated in 1938 and in 1983 became an honorary doctor of theology at Lund University. After her debut publication Rappens på Blåsopp, 1950, she wrote rhymes and jingles, fairy-tales, and stories for children. With her joy of language, she is one of the foremost authors of children’s books in Sweden.

She was also an excellent translator of foreign literature. Her work in this field includes translations into Swedish of Faust, Hamlet, and T. S. Eliot’s Old Possum’s Book of Practical Cats, as well as a number of opera libretti. She has rendered English and German religious poetry into Swedish in Min dikt gäller en konung of 1959. She also wrote for the hymn book of 1986, contributing a number of her own hymns as well as reworked versions of existing hymns. 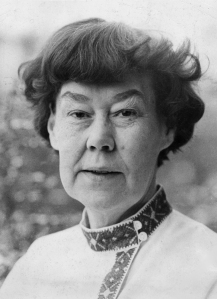