Emilia Maria Fogelklou was the daughter of a district bailiff; she grew up in Simrishamn, qualified as a teacher in 1899, and in 1909 became Sweden’s first woman to graduate in theology, although she was never offered an academic post. She belonged to the community attached to Kvinnliga Medborgarskolan (Women’s College for Civic Training) at Fogelstad, which aimed to educate women to make use of their civic rights, and she was very active in peace and refugee work during the two world wars. She worked as a teacher up to 1922, when she married the lecturer Arnold Norlind. She subsequently earned a living by lecturing at various institutions, such as Socialpolitiska Institut (social policy institute) and Stockholm University. She was awarded an honorary doctorate in 1941.

Both her life and her choice of profession were determined by a religious, mystical experience she had in 1902. She developed her life philosophy in the course of her prolific writing. Her observations in Allvarsstunder 1-2, 1903-1913, and Medan gräset gror 1-2, 1911, reveal an interest in modern psychology, and her entire works, including both her biographies and sociological analyses, which initially seem somewhat diffuse, are held together by and imbued with her individual style and extremely ethical and emotional philosophy of life. In her autobiographical trilogy Arnold, 1944, Barhuvad, 1950, and Resfärdig, 1954, she also develops her own very personal style in a literary direction.

She was an equally diligent letter-writer at the centre of intellectual and spiritual life in Sweden, and her art of letter-writing can be seen in the collection Kära Ili, Käraste Elin, 1989, consisting of correspondence between herself and Elin Wägner. 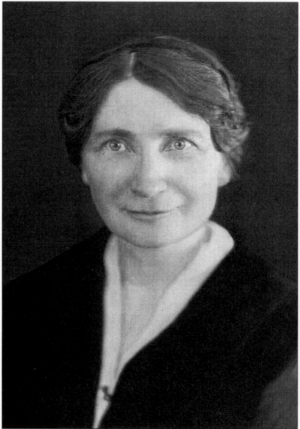