Ing-Marie Eriksson was born in Jämtland, is a teacher, lives in Handen outside Stockholm. Her married name is Sabbadini. She is the author of a large number of novels, many of which have autobiographical traits.

In 1965 she published her first novel, Märit, based on a childhood memory of a mad young woman who was hidden away in her village. The documentary elements of the story were so obvious and unmistakeable that some people who felt exposed sued her for libel and won. She appealed and had her penalty reduced. In her later novels, such as Porträttet, 1990, her writing takes on a more traditional, realist style and tone. In 1994 her novel Vännen från fjärran was published.

The above biography was first published in 1998. Since then, Ing-Marie Eriksson has published the novels Förföraren, 1997, and När kastanjerna blommar i Paris, 2004. 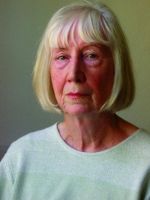