Cordelia Edvardson comes from a professor’s family in Munich. She was liberated from Auschwitz with serial number A 3709 tattooed on her skin and immigrated to Sweden after the war, where she married the journalist Ragnar Edvardson in 1947. They had four children, but one son died at the age of twelve. She has worked with the daily and weekly press, magazines, radio, and television and was the Jerusalem correspondent for Svenska Dagbladet 1977-2006. In 1983, she was awarded the Stora Journalistpriset (the Swedish Grand Journalism Prize).

Since her debut work Kärlekens vittne, 1963, an autobiographical novel, she has recounted what she witnessed at the Nazi extermination camps in novels, short stories, documentaries, and poems, for example in Bränt barn söker sig till elden (N), 1984, Viska det till vinden (N), 1988, and Jerusalems leende (P), 1991. This trauma is the central theme of her writing. 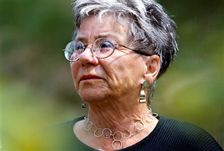