Vilborg Dagbjartsdóttir grew up in a small fishing town in Østlandet, but moved in her youth to Reykjavík. She studied in Iceland, Denmark, and Scotland, is married to an author, has two children, and has been a teacher for most of her working life. She has also translated, been active in left-wing circles, and particularly committed to the peace movement and feminist movement.

Her first poems Laufið á trjánum, 1960, and Dvergliljur, 1968, are symbolic nature poems. In Kyndilmessa, 1971, her political message becomes more conspicuous, and her poems have a more narrative quality. Vilborg Dagbjartsdóttir, who published Klukkan í turninum (P) in 1992, is one of Iceland’s most foremost modernist poets and, moreover, is highly acclaimed for her children’s fiction. 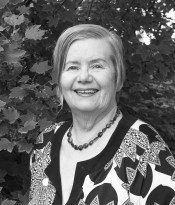