Birgitta Boucht was born in Helsinki, graduated in politics, and, in addition to writing, teaches adult education classes and courses on creative writing. Together with Carita Nyström, she introduced feminism to Finland-Swedish literature with the publication of the book Denne värld är vår. Handbok i systerskap, 1975, and collaborated on the epistolary book Postfeminism, 1991.

In 1981 she published the poems Långa vandring and in 1986 the book of prose Glädjezon about the women’s peace marches in 1981 and 1983, in which she herself took part. In her lampoon Öppna rum. Insyn hos en bostadslös, 1985, she is a confessing debater, while in her later poetic works De fyrtionio dagarna, 1988, and Inringning, 1991, she employs black humour. She has also written easy-read books and together with her brother has published the epistolary book Minnas, glömma och förtiga, 1997.

The above biography was first published in 1998. Since then, Birgitta Boucht has written several works, including poems in Kroppens esperanto, 2003, and Sämsta tänkbara sällskap, 2005, flash fiction in Konservatorns blick, 2002, and the novels Mariposa, 1999, and Tusenblad, en kvinna som snubblar, 2011.

She has been editor in chief of the feminist magazine Astra Nova 1995–2000, and is the recipient of a number of awards, including the Society of Swedish Literature Prize in 2000 and 2003. Since 2008 she has held an honorary doctorate at Åbo Akademi University. 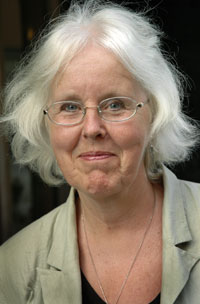