Birgitta of Vadstena, née Birgersdotter, was one of the wealthiest and most powerful women of her time; she succeeded in gaining political and spiritual influence in Europe, where she travelled as only very few did during that period. She was the eldest daughter of Lawman (representative of the law) Birger Persson and Ingeborg, who was daughter of Lawman Bengt Magnusson from Östergötland. She married Ulf Gudmarsson in 1316, who died as a lawman in 1344 immediately after the pilgrimage which he and Birgitta undertook to the Holy Land. Together they had eight children, five of whom survived into adulthood. For Birgitta Birgersdotter, who had religious visions as a child, the death of her husband opened the door to a new phase in her life.

She devoted herself to two missions, which she had been charged with in the new, magnificent revelations which came to determine the rest of her life after Ulf Gudmarsson’s death: She was to heal the schism in the church and persuade the exiled Pope in Avignon to return to Rome, and she was, above all, to obtain the Pope’s approval of the convent she wished to found in Vadstena and the rule of which, Regula Sancti Salvatoris, had been revealed to her by Christ Himself. With this aim, she travelled to Rome in 1349, where, with the exception of periods of time spent on pilgrimages, she lived the rest of her life. Birgitta’s convent was approved in 1370 as a branch of the Augustinian religious order, and Birgitta’s daughter Katarina became the first abbess of the Vadstena Convent. It was due primarily to her mediation that Birgitta was canonised in 1391 and was known henceforth as “Den hellige Birgitta” (Saint Bridget).

Her revelations – which were recorded in Latin together with her confessors, the French theologian master Mathias, master Petrus Olovsson of Skäninge, Petrus of Alvastra, the prior of Alvastra Monastery, and Alfonso Pecha da Vadaterra, the Spanish bishop of Jaën – are an artistic and religious gem characterised by immense religious conviction and sentiment and displaying mastery of the descriptive art. Petrus of Alvastra and Alfonso of Jaën collected, edited, and published Birgitta’s recorded visions, Revelationes coelestes (celestial visions) and Revelationes extravagantes (other visions), to be presented to the body for papal canonisation in 1377. These writings were printed in 1492. The first translation into modern Swedish was Hjalmar Sundén’s Birgitta af Vadstena. Himmelska uppenbarelser, 1957-59. 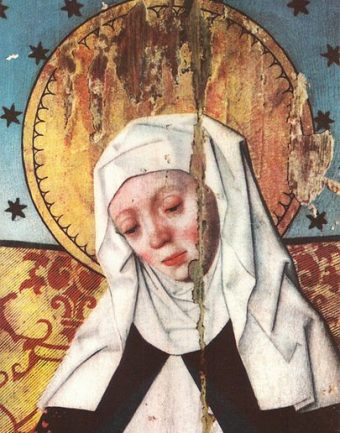