Kerstin Bergström focused on the themes of childhood, her mother, and her affection for Norrland. She grew up in Luleå, studied at Uppsala University, and has always worked as a teacher of Swedish in addition to writing. For many years she has lived in Kiruna, a town that stands at the centre of her poetry.

Her debut work was the autobiographical prose trilogy consisting of Parkeringsplatsen, 1976, Rollen, 1977, and Resan, 1978, in which she in dark tones and with almost tangible pain describes the conditions in which she grew up. In Boken om Henne, 1988, she again portrays her mother, this time in a more reflective and conciliatory tone. In her novels Svek, 1983, and Tveljus, 1990, she describes once again the fear and vulnerability present in her autobiographical works.

The above biography was first published in 1998. Since then, Kerstin Bergström has issued the novels Sonja Elisabeth – ett liv, 1998, Livstycken eller Att fästa trådar, 2005 and Brev från min sommar, 2008. Also, selections from her earlier poetry collections in – till Liv. Dikter i urval, 2001. 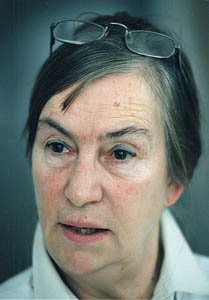