Sun Axelsson grew up in Gothenburg, where her father was city head gardener. She studied at Stockholm University, worked as a literary critic and translator, travelled widely to countries such as Spain, Italy, Chile, France, and Greece, and has lived abroad for long periods of time. From 1963 to 1974, she was married to the sculptor Michael Piper. Through her translation Den mjuka orkanen, 1961, she introduced Swedish readers to Pablo Neruda, whom she met during her stay in Chile in the early 1960s.

She made her debut as a fiction writer in 1959 with the publication of her naïve and mischievous poems in Mållös; however, her breakthrough came with the publication of the characteristic and poetic account of her travels in Chile, Eldens vagga, 1962. In the 1960s she also published two novels: the autobiographical Väktare, 1963, about a girl growing up, and Opera Comique, 1965, in which she employs black humour and exquisite irony to throw light on human alienation. During her time in Greece in the late 1960s, she published the book Stenar i munnen, 1969, under the male pseudonym Jan Olov Hedlund, about the political oppression in Greece. In 1974 she made a comeback as a poet with the collection In i världen, going on four years later to publish another hugely successful work, namely her autobiographical book Drömmen om ett liv (1978; Eng. tr. A Dreamed Life) about her childhood in Gothenburg and her meeting with the poet Lasse Söderberg.

She completed her autobiography in the 1980s, producing two more books – the prize-winning Honungsvargar, 1984, which describes her life in the writers’ scene in 1950s Stockholm, and Nattens årstid, 1989, which is an interesting pendant to her travel account Eldens vagga in that it describes the same period, but from a completely different perspective and using completely different stylistic means. With her novels Ljusets hotell, 1991, and Tystnad och eko, 1994, she returned to fiction. In 1997 she published the poetry collection Sand.

The above biography was first published in 1998. Since then, Sun Axelsson issued the novel Evighetens stränder, 2001. 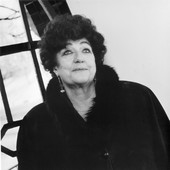