Gunnel Maria Ahlin was born to the family of a school principal in Orsa in Dalarna. She completed her upper secondary school leaving examination in 1938, going on to qualify as a teacher in 1943. Three years later she married the author Lars Ahlin and settled in Bromma outside Stockholm.

In the 1960s, she published a number of novels characterised by the mood of melancholy and lightness typical of that decade: Röster en sommar, 1960, Här dansar, 1962, Puls, 1964, and Refuge, 1967. Success came with her historical novel Hannibal sonen, 1974. Eight years later she made a comeback together with her husband with the publication of the novel Hannibal segraren, a sequel to her first novel about the Carthaginian general.

The above biography was first published in 1998. Since then, Gunnel Ahlin wrote two books about her husband: Lars Ahlin växer upp, 2001, and Nu ska vi ta pulsen på världen, 2005. 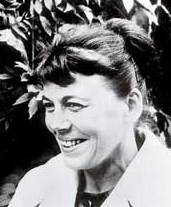