Janette Pauline Wildenvey was born in Vågan in Lofoten and was taken into care at the age of seven in Fiskenes on Andøya. After commercial training, she worked as a model, married the writer Herman Wildenvey, and had a child.

She made her debut in 1925 with the short story collection Bedaarere and became known for her four novels about Andrine, 1929-1955, which are similar to Cora Sandel’s Alberte books in their description of a young woman’s development and yearning for marriage and education. The second book of the series, Andrine og Kjell, 1934, was filmed in 1952. Her memoirs Kjærlighet varer lengst were published in 1975. 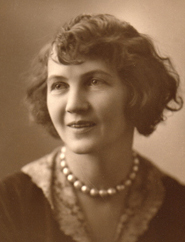