Bolette Sørensen wrote about her native region and worked as a village teacher. She was educated at Zahle’s school. She was born and grew up in the family of a weaver in Årslev near Randers, was unmarried, and worked and wrote for the rural population.

She made her debut under the pseudonym Hans Hede with the novel Maren i Kærgaarden, 1904. Her entertaining and edifying novels and her later amateur plays continued the tradition of school teacher literature from earlier times. 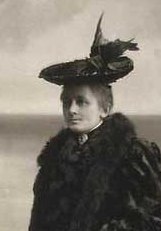