Anja Kauranen graduated in 1977, has worked as a counsellor for amateur writers, as a social worker, cleaning assistant, swimming instructor, and dancer, is an active debater and writes for the newspaper Suomen Kuvalehti. She is married to the author Pentti Saarikoskisson and has two children.

She made her debut in 1981, creating a stir with her novel Sonja O. kävi täällä, one of the “power books” of the 1980s about 1970s Helsinki, its cultural cliques, and the new type of feminist Don Juan. On one level the novel is emancipatory, on another it is the description of the working-class neighbourhood of Berghäll and Sonja O.’s confusing relationship with her family and partner. The jargon, reminiscent of Henry Miller, is full of associations and very rough, overflowing with anal expletives. In her novel Kultasuu, 1985, the main character grinds away at both men and words, and Pimeää vain meidän silmillemme, 1987, deals with woman’s rebellion against those who exploit her. She has also written Tushka, 1983, Kiinalainen kesä, 1983, Pelon maantiede , 1995, Syysprinssi, 1996, and Arabian Lauri, 1997.

The above biography was first published in 1998. Since then, Anja Snellman has published nine novels, most recently Rakkauden maanosat, 2005, Lemmikkikaupan tytöt, 2007, Harry H, 2007, Parvekejumalat, 2009, and Öisin olemme samanlaisia, 2011. She has also published the poetry collection Saa kirjoittaa, 2004. 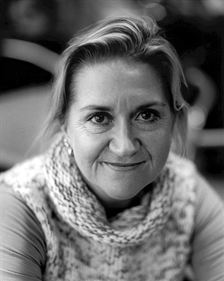