Juliane Preisler is the daughter of philosopher Peter Zinkernagel and lecturer Gerd Preisler. She passed the upper secondary schooling examination in 1978, and obtained a master’s degree in literary history in 1984, part of her work being on French author Marguerite Duras. In 1996 she married the dramatist Peter Asmussen. Her debut poetry collection Uden, 1983, together with her subsequent collection Ind, 1984, were key works in young 1980s poetry. In 1985 her short stories Standset aften were published, followed in 1986 by her novel I en anden. Childhood and puberty are recurrent themes, along with powerful, sensual experiences and a feeling of pent-up rage, and her works include psychological suspense novels such as Dyr, 1992, which is the basis for Susanne Bier’s horror film Sekten, 1997, historical novels such as Kyssemarie. En historie om Marie Grubbe, 1994, and teenage novels such as Zip, 1991, and Kys, 1992. In her poetry collections Det tændte hus, 1987, Hun, 1990, Fuglenat, 1993, and Liv, 1996, Juliane Preisler continues to write with her extremely sharply illuminated and constantly surprising poetic expression. Her novel Eventyr describes a disastrous encounter with sexual passion. In 1998 her novel Glas was published. 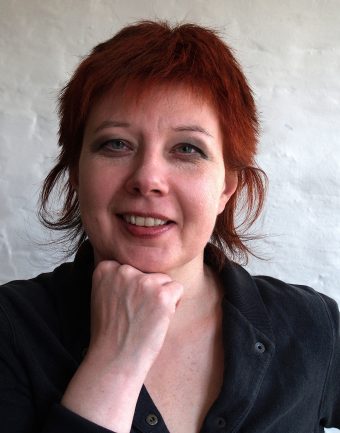