Anna-Karin Palm was born in Stockholm, graduated, did a PhD in literature at Uppsala University, and temporarily worked on the editorial committee of the periodical Åttiotal. She was first published in the anthology of debut works Novella 85.

Her debut novel, Faunen, 1991, which was well-received by both readers and critics, takes its cue from the English literary tradition and from contemporary literary philosophical discussions. Utanför bilden, 1992, contains short stories and short narratives about works of art. Images and myths are central to her writing, and her novel Målarens Döttrar, 1997, is characterised by an exciting game with literary pastiche and Gothic narrative.

The above biography was first published in 1998. Since then, Anna-Karin Palm has published several works, including the short stories collection In i öknen, 2001, and the two novels, Herrgården, 2005, and Snöängel, 2011. 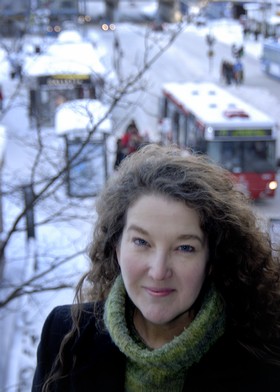