Lise Nørgaard was born in Roskilde and grew up in the bourgeois, provincial milieu she describes so affectionately and accurately in the popular television series Matador. She trained as a journalist, was a prominent member of staff of the newspapers Politiken and Berlingske Tidende and employee and chief editor from 1975 to 1977 of the weekly magazine Hjemmet. She made her debut as an author in 1960 with the humorous novel Med mor bag rattet and also wrote and co-wrote popular radio and television series, such as Karlsens Kvarter and Huset på Christianshavn. In 1992 and 1993 she published her memoirs Kun en pige, filmed in 1995 and a huge success, and De sendte en dame.

The above biography was first published in 1998. Since then, Lise Nørgaard has published Et liv med Matador, 2003. 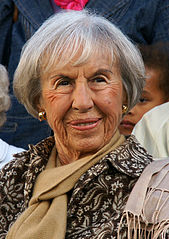