Cally Monrad was a singer and poet. She made her debut as a concert singer in 1899 and as a poet in 1913 with Digte. Her entire literary production comprises seven poetry collections and one novel. She was married and divorced four times and had four children.

She spent long periods of her life living abroad, in particular in Germany, and was a favourite with both the German and Scandinavian public as a romance singer in the first decade of the twentieth century. In 1940, she joined the Nazi-friendly Nasjonal Samling party and became a leading figure in Vidkun Quisling’s cultural efforts during the war. She was subsequently dishonoured and became a more or less forgotten figure. 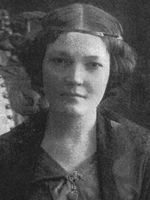