Marie Lundquist was born in Jönköping and grew up there and on Lidingö, Stockholm, where she now lives. She studied at university, has worked as a librarian for fourteen years, but now devotes her time to writing. She also works as a translator and freelance editing for the periodical Ordfront Magasin.

Her debut work was the prose poem collection Jag går runt och samlar in min trädgård inför natten, 1992, followed by Brev till de sovande (P), 1993, in which the poems’ first person awaits a sign from a loved one who is missing and possibly dead. Marie Lundquist stood out from the start as a mature poet who mastered her means of expression. In 1995 she published Astrakanerna. Dikter på prosa and in 1997 I stället för minne, a prose poetry narrative.

The above biography was first published in 1998. Since then, Marie Lundquist has published her first novel, Monolog för en ensam kvinna, 2005, as well as the poetry collections En enkel berättelse, 2002, and De dödas bok, 2008. She has also written plays for radio, and the work Drömmen om verkligheten – fotografiska reflektioner, 2007. 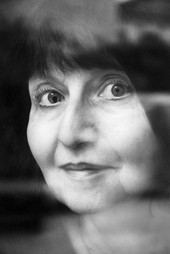