Sara Lidman was born in Missenträsk in Västerbotten, where her parents had a smallholding. Her home village with a population of 286 became a pivotal element in her writing. After six years of schooling she was sent to a sanatorium, where she became acquainted with books and radio. She took her lower secondary school leaving examination by correspondence course and presented herself for the upper secondary school leaving examination as a private candidate after spending two years at the so-called student factory of Mariannelund. After brief periods working as a waitress and post office worker and as a theatre trainee in Stockholm, she embarked on studies at Uppsala University. During her student days, she was admitted to a sanatorium on several occasions, finally spending time at a common European student sanatorium in France. At the lively literary club in Uppsala, she came into contact with Stina Aronson and Folke Fridell and through her language studies became familiar with the works of Marcel Proust. After graduating in 1949, she taught English in Småland. She was a member of Samfundet De Nio (The Nine Society) from 1955 to 1963.

She was immediately very successful with her debut novel Tjärdalen, 1953, which like all her following books is about responsibility for fellow humans. From the outset, her works were written in a language influenced by modernism, the core of which is the local dialect of her home region rooted in the old Lutheran texts, a language that depicts the everyday with a connection to the ‘unheard of’. This continues in her novels Hjortronlandet, 1955, Regnspiran (1958; Eng. tr. The Rain Bird), and Bära mistel, 1960. For her, the experience of the enormous success of her first novels was almost stifling, and her subsequent years of travel and periods abroad were important to her artistic development. She was one of the first Swedes in the 1960s to promote solidarity with South Africa, for example with Jag och min son (N), 1961, and with Vietnam in her travel book Samtal i Hanoi, 1966.

During this period, which also saw the publication of her book about Swedish mine workers, Gruva, 1968, she was mainly preoccupied with poetic and political commitment, and her writing became known and discussed throughout Scandinavia. In the 1970s she wrote the major railway epic, starting with Din tjänare hör, 1977, in which her profound human insight is combined with her knowledge about colonisation and exploitation. In 1996, she published Lifsens rot. Sara Lidman’s writing, which includes drama, evolved into one of the richest at the turn of the new millennium. Her works have been translated into several languages, and she was the recipient of several literary awards.

The above biography was first published in 1998. Since then, Sara Lidman wrote the novel Oskuldens minut, 1999, and the collection of articles Kropp och skäl, 2003. 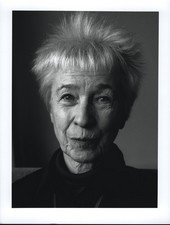