Sissel Lange-Nielsen was born in Kristiansund and grew up in Trondheim, is a literary and theatre critic for the daily press, and is married with three children. After her debut work, the contemporary novel Såmannen, 1959, she wrote primarily historical novels on topics taken from European history. Her key works are a trilogy set in the time of the crusades, Under fiskenes tegn, 1978-1982, and the accounts of the life of the Medici family in Florence: Våren, 1985, Laokoon, 1987, and Guds død, 1989. Her novels Enhjørningen og rosen, 1994, Tryllefløyten, 1995, and Den norske løve, 1996, are about the life of her great-great-grandfather, colonel Hans Henrik Rode.

The above biography was first published in 1998. Since then, Sissel Lange-Nielsen has written the novels Havet, jorden og fugleskriket, 1998, Rød engel, 2001, and Vår frue av Kazans hjerte, 2004. She has also written her autobiography Et forfatterliv, 2006. 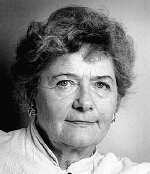