Leena Lander graduated in Finnish language and literature and grew up in a boys’ home in Åbo that was run by her father. Her successful novel Tummien perhosten koti, 1991, takes place in a young offenders’ home on an island in the skerries of Åland, where the director Olavi Harjula rules with unchecked power. The novel was nominated both for the prestigious Finlandia Prize and the Nordic Council Literature Prize and was followed by the novel Tulkoon Myrsky, 1994, also nominated for the Nordic Council Literature Prize, and which continues with the same set of characters in a genealogical tale about mysterious love, strong women, and a crime plot barbed with social criticism. In 1997 she published the final part of the trilogy Iloisen kotiinpaluun asuinsijat.

These two successful novels, which were well received by readers and critics alike and were translated into several languages, marked a turning point in Leena Lander’s writing. Having started off her career with six light novels, she is now one of Finland’s major literary meteors. A theatre version of Tummien perhosten koti was performed in 1993 in Finland, and the film rights have been sold to Hollywood. In addition to novels, she has also written essays and dramas for the theatre, radio, and television.

The above biography was first published in 1998. Since then, Leena Lander has written the novels Käsky, 2003 and Liekin lapset, 2010. 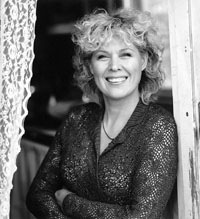