Kirsi Kunnas grew up in Helsinki as the daughter of the painters Wäino Kunnas and Sylvi Alice Karlsson, worked after completion of upper secondary school at a publisher’s from 1947 to 1962, and was a theatre critic from 1953 to 1960. She is married to the author Jaakko Syrjä and has two children.

In 1947 her debut poetry collection Villiomenapuu was published, and it was developed further in Uivat saaret, 1950, and Vaeltanut, 1956. These collections contain modern poetry that ranks her among the groundbreaking women in Finnish post-war modernism. She wrote children’s books such as Tiitiäisen satupuu, 1956, in which she plays with nonsense, rhythm, rhyme, and strong emotions. In 1980 she returned to writing poems for adults, publishing Kuun kuva meissä and Valoa kaikki kätketty, 1986.

The above biography was first published in 1998. Since then, Kirsi Kunnas has written several books with poems for children. 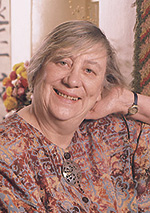