Svava Jakobsdóttir grew up in eastern Iceland, Canada, and Reykjavík and studied literature in USA, England, and Sweden. In the 1960s, she worked in Iceland as a journalist and was elected to the Icelandic Parliament in 1971-1979 as a candidate for the socialist party Folkealliancen. After 1979 she worked as a professional writer and researcher of literature. She was married and had one child.

She made her debut in 1965 with her collection of short stories, 12 konur, but became successful in 1967 with her psychological-realist, grotesque, and carnivalesque short story collection Veizla undir grjótvegg, of which one of the stories, “Kona með spegil” (1986; Eng. tr. “A Woman with a Mirror”) is the title story in a collection of stories selected by her and published under the title, Kvinde med spejl, 1986. Most of her short stories have female main characters and heavily criticise the constricting role of women in the 1960s. Her novella Leigjandinn (1969; Eng. tr. The Lodger) which is an ambivalent piece of writing, has been interpreted as an allegory of the impact of the NATO base on the mentality of Icelanders, although this interpretation disregards the novel’s feminist views.

In the 1970s she wrote mainly dramatic poetry, and Lokaæfing, 1983, signalled a turning point in her writing. It features married couples in a shelter during a “drill” to practise for a future nuclear attack. The moral discussions and her ecological commitment reappear in her aesthetically well-written novel, Gunnlaðar saga (Eng. tr. Gunnlöth’s tale), 1987, which contains a new and original understanding of Nordic mythology. Her other important works were Hvað er i blýhólknum (D), 1970, Æskuvinir (D), 1976, Gefið hvort öðru (SS), 1982, the television drama Næturganga, televised in 1989, and Undir eldfjalli (SS), 1990. 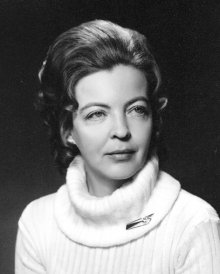