Katrine Marie Guldager was born in Ordrup, graduated in Danish in 1994, and attended the Forfatterskolen (writers’ school) from 1992 to 1994. Both her debut poetry collections Dagene skifter hænder, 1994, and Styrt (1995; Eng. tr. Crash), express the wish to find a poem or a voice that can accommodate the first person’s attempts to catch hold of herself, the world, and love. A linguistically free-wheeling rhythm and musicality, which is particularly cultivated in the highly acclaimed Styrt, is also the spirit in the prose monologue Blank, 1996, in which the first-person narrator is on the point of disappearing completely in a predictable and, at times, stifling environment. Katrine Marie Guldager was awarded the Humoristprisen (the humorist prize) in 1995.

The above biography was first published in 1998. Since then, Katrine Marie Guldager has published the novels Det grønne øje, 1998, En plads i historien, 2008, and Ulven, 2010. Additionally, she has published the poetry collection Ankomst, Husumgade, 2001, and the three short story collections København, 2004, Kilimanjaro, 2005, and Nu er vi så her, 2009. She is also the author of a large number of children’s books. 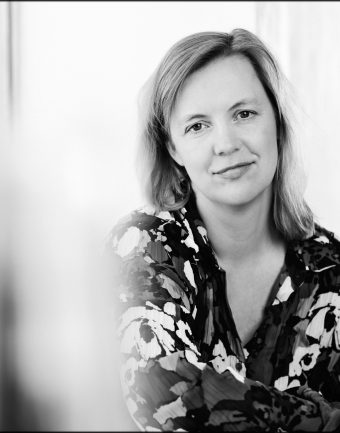