Vigdís Grímsdóttir was born in Reykjavík, is a qualified teacher, and has a degree in Icelandic literature. She has two children.

Her writing revolves around the themes of art, sexuality, and death. While her first novels are experimental in their use of language, hyperbolic, and poetic, her novel Grandavegur 7, 1994, is more subdued in tone. In 1996 her novel Z: ástarsaga was published. 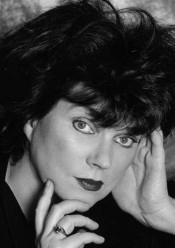