Marianne Fredriksson is one of the most well-read writers in Sweden and grew up in a working-class home in Gothenburg, where in her young days she dreamed of becoming a writer. She started her career as a proofreader for a newspaper, but soon became a writer for the daily and weekly press, including the newspapers Svenska Dagbladet and Allt i Hemmet, where she was chief editor from 1962 to 1974 before her sensation-provoking debut in 1980 with Evas bok (N), about Eve’s long journey back to Paradise and to herself after Cain’s murder of his brother Abel.

As in many of her later novels, such as Kains bok, 1981, Noreas saga, 1983, and Syndafloden, 1990, she blends a biblical motif with Jungian depth psychology. Her contemporary novels such as Blindgång, 1992, are equally critical of civilisation and present women as the bearers of the original strengths that Marianne Frederiksson felt had been lost in modern society. 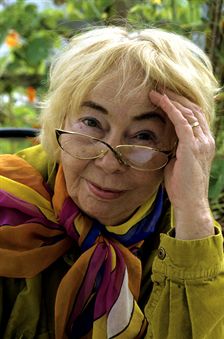