Helena Eriksson was born in Nyköping, graduated, and worked in various jobs, including at a laboratory. She has worked for the magazine Ord & Bild, and lives in Gothenburg.

Her debut collection en byggnad åt mig, 1990, consists of expressionist prose poems about dramatic encounters with an animal king, where both nature and love are depicted as a morass we risk sinking into. Animal and human worlds are often mingled in her poetry, which also includes Spott ur en änglamun, 1993, a female pastoral about creation. In 1996 she published the poetry collection Mark.

Helena Eriksson is the recipient of a number of awards and honours, including Sveriges Radios lyrikpris 2008, Gerard Bonniers lyrikpris 2009 and Aftonbladets litteraturpris 2009. 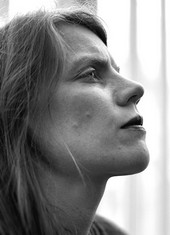