Jette Drewsen was born in Hvejsel near Jelling. Her father was a veterinarian. She studied psychology, married, had three children, and later divorced.

Her debut novel Hvad tænkte egentlig Arendse, 1972, the story of a woman’s frustrating existence as a housewife with young children, sparked a debate and at the same time ushered in modern women’s literature in Denmark. Her works of the 1970s, such as the novels Fuglen 1974, Pause, 1976, and Midtvejsfester, 1980, which was written in a dialogue with the feminist movement, trace the outline of a new, female social psychology for a well-educated generation of women torn between children, work, divorce, and unstable relationships.

In the 1980s she widened her focus and produced two major social critiques in the form of the novels Ingen Erindring, 1983, and Udsøgt behandling, 1986, each centering on a murder and portraying destructive social structures. Her trilogy Lillegudsord, Jubeljomfru and Filihunkat, 1992-1994, recounts the life of a girl named Ella in the 1950s. This story of socialisation told through one girl’s strange and witty attempt to acquire a self, a language, and a place in life marks a turning point in Jette Drewsen’s writing, in which aesthetic expression itself has always been a theme.

Jette Drewsen was head of the fiction section of the Danish Authors’ Society in 1992, received a lifelong grant from Statens Kunstfond (the Danish Arts Foundation) in 1994, and the same year received the Beatrice Prize from Det Danske Akademi (the Danish academy of language and literature). In 1997 she published the novel Jorden er nær.

The above biography was first published in 1998. Since then, Jette Drewsen has written the books Lisbets søster: erindringsessays, 2001, Det inderste råstof : beretninger fra en rejse til Det Blå Folk, 2004, and Oven for klinten: noveller, 2007. 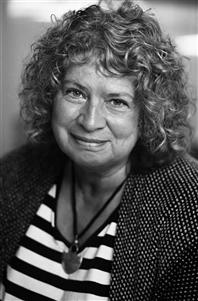