Eva-Stina Byggmästar was born in Österbotten, comes from a farming- and working-class background, is a trained artist. As with many other contemporary Nordic writers, visual arts were the key to poetry characterised by spontaneous imagery and physical sensitivity.

Following an ambitious debut in 1986, followed by a further three collections of poetry, her poems work through an image-laden chaos and ritual transformations to a place where a more durable first person – or first persons – can crystallise. In För upp en svan (P), 1992, her poetry takes a new shape. The poems in this breakthrough collection are characterised by wordplay, neologisms, onomatopoeias, and frankness; they make up a trilogy together with Framåt i blått (P), 1994, and her collection Bo under ko (P), 1997. The imagery is concrete, the mood robust and affectionate, the proportions of joviality and gravity are distorted, and joy is an overriding theme.

She is the recipient of several prizes and honours. She has been nominated for the August Prize, awarded by the Swedish Publishers’ Association, and the Nordic Council Literature Prize. 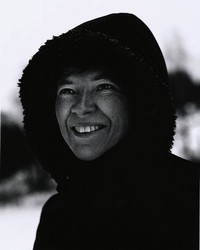