Lisbeth Smedegaard Andersen is a writer, theologian, and art historian, is married to a civil law judge, and has four children. After a number of years as a pastor, she published her first collection of hymns in 1984, Vinterlys og tjørneblomst. Salmer, followed by Du bor i vor dag. Salmer og digte, 1988, and Bristefyldt af sang, 1989. She has also published works on Rembrandt’s religious motifs, Rembrandt – en moderne forkynder, 1990, and on images of Christ in classical and modern art, Ecce homo. Kristusfremstillinger i kunsten, 1993, and Ikoner i moderne kunst, 1996.

As a poet, preacher, and art historian, she is strongly dedicated to conveying the Christian message in a vibrant and meaningful way. In 1996 her collection of sermons entitled Ordet der høres was published.

The above biography was first published in 1998. Since then, Lisbeth Smedegaard Andersen has published hymns, a collection of sermons, and a devotional book, as well as the crown of sonnets Nu lægger vinden sig i verdens haver, 2004. She has authored and edited books about art and Christianity, including Det åbenbarede ansigt, 2006, and Guds moder og himlens veninde, 2008. The latter deals with the significance of the Virgin Mary for the Church, art, and views on women, and was nominated for the Weekendavisen Literature Prize. 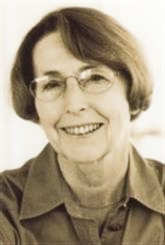