Inger Alfvén was born in Stockholm to Hannes Alfvén, winner of the Nobel Prize in physics. In 1964, she qualified and found employment as a social worker, but has worked as a professional author since 1977. She is married and has a son.

Inger Alfvén, who made her debut in 1964 with the novel Vinbergssnäckan, achieved wider success in 1977 with her novel Dotter till en dotter and has written a large number of novels, including S/Y Glädjen, filmed in 1988, Ur kackerlackors levnad, 1984, Judiths teater, 1989, Elefantens öga, 1992, En moder har fyra döttrar, 1994, and Berget dit fjärilarna flyger för att dö, 1997. In her portrayal of women striving for freedom, central elements are the relationships between the past and the present, necessity, and free will. 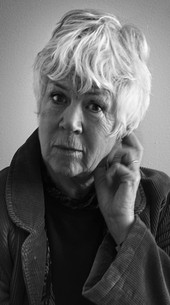