Jane Aamund was born into a well-to-do home in Frederiksberg and is married to a dentist. After training as an English bilingual secretary, she worked for a number of years in public relations and as a journalist with the newspaper Berlingske Tidende from 1980. She became successful as a fiction author with her family chronicle about the Copenhagen neighbourhood of Christianshavn in the 1880s, Klinkevals, 1989, Juliane Jensen, 1990, and Oven vande, 1992.

Her novel Colorado drømme, 1997, about mature love was a big success with the public, and in 1998 she was awarded the booksellers’ award De Gyldne Laurbær (golden laureate) for the first part of her memoirs, Den grønne port. Erindringer fra tremmeseng til brudeskammel, 1998. 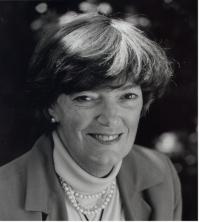